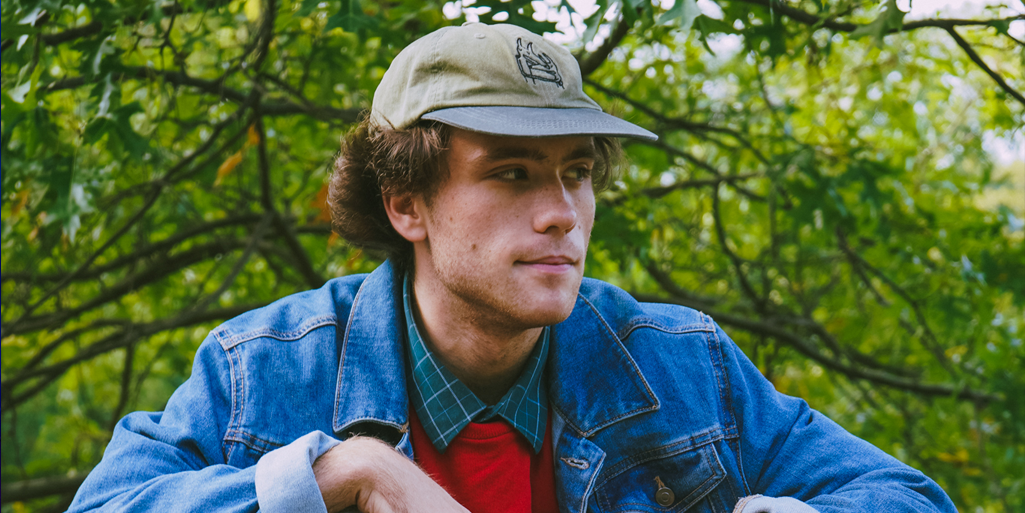 Brendan Wright is the singer/songwriter behind the Boston-via-Saratoga Springs alternative rock project Tiberius. He sat down with our web services coordinator Riley Greenstein to talk about his new album Lull and moving to Boston.

YOU GREW UP IN VERMONT, AND FOR COLLEGE YOU WENT TO SKIDMORE IN NEW YORK. WHAT BROUGHT YOU TO BOSTON?

Brendan Wright: I wanted to come to Boston because I've done the music thing for a while, and it's something I've always aspired to. I was looking for an East Coast city to get into a scene and go to some shows and be close to some exciting material being made and just in general trying to engage in that. So I came here 'cause I have some roots here. I was actually born in Boston, and I have some family in the area. So Boston was kind of in the cards and it just so happened that I was able to secure some work right outside of Boston. So I ended up making it over this way a little before pandemic times. And I got to experience maybe like a second of all of that before everything shut down last year.

IN THAT LITTLE BIT WHERE YOU GOT TO EXPERIENCE THE LOCAL SCENE, WHAT STOOD OUT TO YOU?

BW: It was interesting coming from a place where, at Skidmore, we have a really small music scene. It was sorta like there was this hide mind mentality. Everyone was into the same thing, there was one type of sound. It was fun for sure, and there were a lot of great acts I got to play with and I got to get to know. But it definitely did feel like one type of thing over and over again.

Coming to Boston, I just noticed that there are people who like independent music and do their own thing, but there are so many sub-categories of that. There are people that I met that are on totally different ends of the spectrum creatively, but both in that DIY vein. I notice there's a lot of music diversity in that sense, or at least it felt like there was to me. There was a lot of options to pursue.

That being said, that was only my first impression of the scene and I didn't really get to explore it and dive deep. So I'm sure that someone who's been here a little bit longer might have a different take than me perhaps. But I guess long story short, it felt like there was a lot of opportunity.

I ACTUALLY TOURED SKIDMORE WHEN I WAS LOOKING FOR COLLEGES. AND I JUST REMEMBER THAT BUILDING WITH THE STAGE IN THE MIDDLE OF THE WOODS.

BW: Yes, yes! That's Fallstaffs. In my time at Skidmore, I ran the club Lively Lucy's that would book acts that played the building. I also got to do some sound work. And we had open mics in there every Thursday. That was, like, the scene: open mic on Thursday night, which was super fun. Basically my source of live entertainment for four years.

LET'S TALK ABOUT LULL. THIS IS YOUR THIRD ALBUM. WHAT WAS GOING ON IN YOUR LIFE WHILE YOU WERE WRITING THIS?

BW: I started putting together content for this in my last year of school, which was in the fall of 2018/spring of 2019. I write really long form, and I wanted to come up with a sort of concept to string along a bunch of these songs that I was writing while leaving school. And I just thought that this could be my in-between record. I thought this was gonna be more like a compilation of songs, like these are the songs that I wrote at the end of college and the beginning of whatever came next.

But as the process dragged on, there was a lot more emotion and feeling that went into this transitionary period. I felt very old in one regard that I was leaving school. And also, senior year I was definitely over stretching myself physically and psychologically. My body was breaking down, so I felt very old, I felt very worn down. And just mature in a sense.

But at the same time, there was the rest of my life on the horizon. Which was weird, 'cause I went from feeling like this old man character to feeling pretty young and baby-ish in the context of the real world. And kind of getting into what a work schedule would be like after college. There was an aspect of that.

There definitely was a lot of time between the time that I ended up moving to Boston and the beginning of the pandemic. A lot of time to think about my college experience. A lot of time to think about harboring a lot of feelings, evaluating feelings of self-worth. I tend to be a very self-deprecating person for a lot of different reasons, and I was trying to evaluate that in my songs. I ended up writing an album that was a lot about trying to take care of myself and trying to put my best foot forward in the most basic sense.

I DEFINITELY CAN FEEL A LOT OF THAT SELF-DEPRECATING ENERGY. YOUR SECOND ALBUM IS CALLED A DEPRESSING OPTIMISM, AND THAT'S THE VIBE I GET FROM YOUR MUSIC.

BW: A Depressing Optimism was my first attempt at putting together a huge long conceptual project. And I think that I was trying to understand a lot of feelings, basically like I took a philosophy class when I was 19 and was like "oh my god!" like existentialism. I felt very overwhelmed with that concept. And I tried to do something that I think was a little bit tongue and cheek and a little bit out of my ability to write at the time.

I look back and it feels a little dark, a little embarrassing in some sections. But it's the album I made when I was 19, and that's kinda where the kinds of character depictions that I was trying to work with at that point. When that was done, I really wanted to step forward to something that was a little more optimistic but in a real sense.

AND THAT'S WHAT WE GET IN LULL.

I WANTED TO TALK ABOUT THE SINGLE "PALE ALE," BECAUSE THAT'S A REALLY INTERESTING STORY THERE. YOU HAD PUT IT OUT ALREADY, BUT THEN REWORKED IT AND RE-RECORDED IT FOR THE NEW ALBUM. I WANTED TO KNOW, WHAT INSPIRED YOU TO CHANGE IT UP AND NOT JUST TAKE WHAT YOU'D ALREADY DONE?

BW: That song was always intended to go with this project. That was one of the first songs I wrote for the project. And then, at the time, I was playing it a lot with the people I was playing with back at Skidmore. I wanted to do a recording with them 'cause I really liked the way that it sounded. And it felt kind of like our song as a band. It was the first song that I made where I didn't start with the recording, but I brought it into a live session or a live environment and they got to interpret it and work with it. So it felt kind of like our song, so I wanted a recording of that.

We put the song out, and then it took me a while to figure out the rest of the album. I think thematically, the album grows from that song, 'cause that does seem to be the furthest experience back before the transitional period of my life. So I always wanted it on the album. There were a few lyrics that were reworked that I felt the need to change, just because there were just some general things that I was unhappy with or I didn't think sounded as good.

Later in the album there are some refrains that go back to the "Pale Ale" verse, and I wanted to make things thematically consistent, so I changed some lyrics. But actually, the recording is more or less the same then when we recorded it in the spring of 2019. It's just remixed a little bit and remastered. Some subtle lyric changes, but that's it.

IT KINDA GREW AS YOU GREW.

BW: Yeah, absolutely, which was really fun and really cool. I was sort of encouraged to rerelease it when I got to Boston. I started working with [my manager] Elijah and a team of other individuals that were helping me promote and bring my music and exploration of that music to a new level. And Elijah encouraged me to put that song out again for a new audience.

We did a video, which was a lot of fun. I think I was hesitant at first because, usually, I'm the type of person who just likes to hand somebody a full album and just like "hey sit down for 45 minutes and listen to this." But I think by putting it out again, we reached a lot of new people, which was really cool. And I like the new version a lot more. And it was just really fun to see how much life that song could get, which was something I didn't realize it could do.

OKAY, SO WE'RE ALMOST OUT OF TIME. I JUST HAD ONE MORE QUESTION I WANTED TO ASK. GOING BACK TO THE LOCAL SCENE, I KNOW THAT YOU'VE BEEN DOING A LIVESTREAM HERE AND THERE, BUT OBVIOUSLY IT'S BEEN A WHILE SINCE WE'VE ALL GOTTEN TO PLAY LIVE MUSIC IN PERSON. FROM LULL, FROM THE NEW ALBUM, WHAT ARE YOU MOST EXCITED TO PLAY LIVE?

I will say, I was really sick of "Pale Ale" for a while. But I am excited to play that one again live because I don't really like playing it that much by myself. It's hard to necessarily replicate the energy of a band in a solo performance. But that song is undoubtedly fun to play with my friends. So i'm excited to play that one too. Hopefully do some jumping around type stuff.

WELL, THANK YOU VERY MUCH FOR COMING ON! IS THERE ANYTHING ELSE YOU WANNA SAY?

BW: The album's out, it's on all the places you can probably stream other things, and trying to do some more, trying to expand the life of the album as much as possible while we're all still living in this pandemic. Hopefully we'll make a few more videos or do a few more livestreams. And hopefully we'll have some new content out in the spring. And in general, thank you so much for having me on the interview. Definitely appreciate you taking the time and letting us have this space, so thanks.

Catch Tiberius and more local artists on Wicked Local Wednesday! Every Wednesday at 9PM, we play music from Boston-based bands you won't hear anywhere else.