Emack & Bolio's has been serving "Ice Cream That Rocks" to the Boston community and beyond since 1975. In honor of National Ice Cream Day on July 18th, we take a look at its rock and roll roots. Web services coordinator Nora Onanian recently sat down with Emack & Bolio's founder Robert Rook at their Charlestown location to talk about the ice cream chain's fascinating history. From its beginnings during Boston's roaring music scene in the 70s to the funky environment kept alive today, here's the scoop on this beloved local ice cream spot. 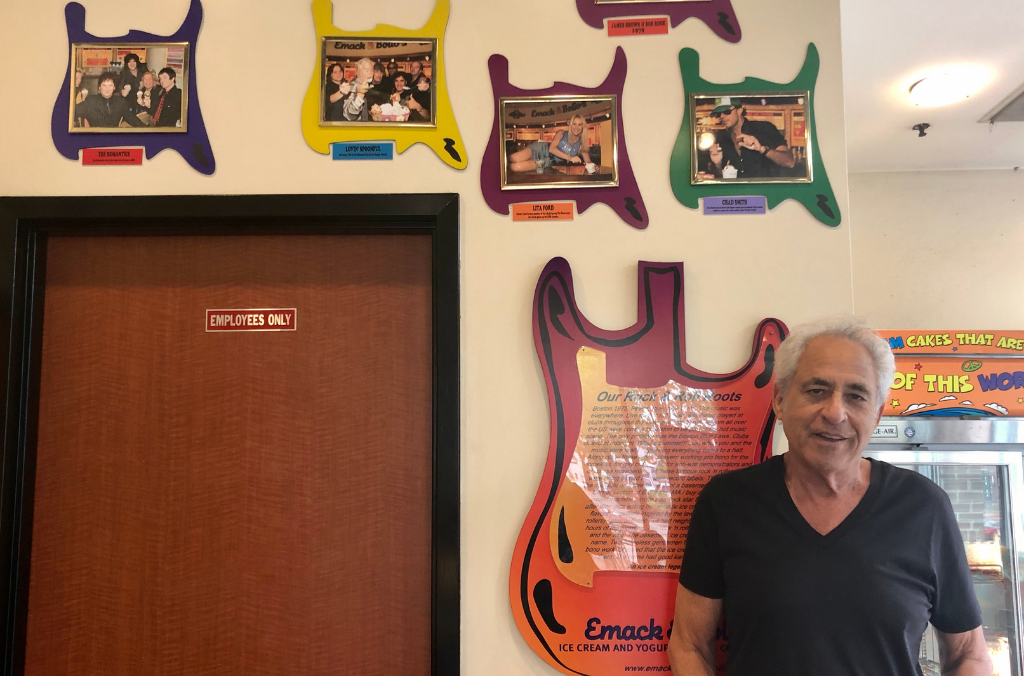 Bob Rook, the founder of Emack & Bolio's, stands in front of signs tracing the ice cream stores' rock and roll roots at the Charlestown location. Photo by Nora Onanian.

NO: I was in Chatham when I walked into one of the Emack & Bolio's locations and I saw the "Rock 'n Roll Roots" sign. I thought it was such an interesting story, so I'm really excited to learn more about the rock and roll roots!

RR: I'm excited to talk about it, because people usually ask me about ice cream. I spent from 66 until the mid-90s in the music business. So I have a lot of music history, so to speak. And a lot of it is actually up there (gestures). There are a lot of pictures of me and different rock people. I wouldn't call James Brown rock, but different musicians. I kind of married the music and the ice cream together.

NO: I read that you founded it in 1975. Could you kind of take me back to the 70s and kind of explain the scene that started it all?

RR: Sure. So in the early 70s, Boston had laws called Blue Laws and what happened was on Saturday nights, all the clubs had to close at midnight. The reason being they wanted you to go to church the next day. So, you know, bands go on at 10 o'clock, you play a long set and then the night's over. So that wasn't much fun, right?

When I was in college, I had managed bands and had brought groups - I don't know what they call it - but I would book bands for the college and they would run big concerts. So I kind of knew about the music business and all my friends were musicians. When I came to Boston, my friends would always ask me questions because I had a legal background. So they would ask me music business questions and I would just help them and answer them.

CRAVING A HANGOUT SPOT AND SOMETHING SWEET

RR: What happened was when these Blue Laws came into effect, I thought we should have a place to go after these clubs closed down and hang out, you know, smoke a joint, play some music, have some fun. So, I rented a basement apartment in Brookline, off a side street and I invited my friends who are musicians to come down after their gigs and just hang out. That's basically what it was.

THE BEGINNINGS OF THE BUSINESS

RR: When I saw how ice cream was being made, I thought it was all wrong, like you would never make ice cream that way. For example, they would put coloring in it and they would put artificial extracts. At that point in time, everybody wanted to make cheap ice cream. Nobody wanted to make good ice cream. If you were home making ice cream for yourself, you would never do that. So I thought, 'well, why not just make it like I want to eat it,' which is what I wanted to do. So I just started making ice cream the way you would make ice cream if you were home. You use real fruit and you use pure ingredients and it tastes a lot better when you do that.

So all my friends who are in bands would come down and we'd hang out, party and have fun and eat ice cream. Then after a few months of paying the rent and the electric and the ice cream bills, I thought maybe I should sell the ice cream instead of giving it away to my friends. So what happened is I had the health department come down, we fixed it up and did everything.

HOW EMACK & BOLIO'S GOT ITS NAME

RR: I was doing pro bono work for the homeless at the time and I had two homeless clients called Donald Emack and John Bolio. And when we opened the ice cream store, they said, 'what are you going to name it?' I said 'I don't really know. I didn't really think of that.' And they said, 'well, why don't you name it after us?'

They thought I was going to do 'John and Don's' because there was an ice cream store in Somerville, Steve's, that was very popular, that had opened a couple of years before. Instead of calling it John and Don's, I just called it Emack & Bolio's. It was just a goof and people told me it's the worst name in the world, no one will ever remember it, you know. And it didn't matter because it was a hobby for me. It was never anything more.

A FEW OF THE ROCKSTARS WHO FREQUENTED EMACK & BOLIO'S

RR: Basically, a lot of my friends went on to become pretty popular in music, right.

NO: Yeah, could you name a few?

RR: Aerosmith and The Cars and the group Boston. And there were a lot of local groups that did very, very well, who I worked with and I was friends with. They would come down and have the ice cream. That's what happened.

COMMITTING TO TURNING HIS HOBBY INTO A BUSINESS

RR: For many years, until about the mid-90s, I ran the ice cream stores as a hobby. I didn't really run it as a business. And I basically stayed in the music business and worked with a lot of groups.

In the mid-90s, I was managing a group called the Emergency Broadcasting Network, and they had developed something we called a video sampler. And we sold that to U2 and they called it Zoo TV, and then they hired us to do their world tour Zooropa. At the end of that tour, I kind of left the music business. It kind of burnt me out. It was wonderful, but it was a lot.

NO: A big finish!

RR: Yes. It's always good to go out on top, right? So I left the music business and I went back into ice cream more as a business as opposed to a hobby. And that's basically how it all happened.

NO: And what kind of vision did you have for Emack & Bolio's going forward when you decided to make it a business and commit to that?

NO: Did you ever have an interest in opening a business or ice cream specifically before?

NO: So you just kind of realized and it kind of happened by chance?

NO: It definitely sounds like it was a fun environment!

RR: It was very good.

NO: Is there anything you do to keep the rock and roll roots alive today?

RR: Well, you know, I do have a lot of friends who are musicians. I communicate with them occasionally and I see them once in a while. I listen to a lot of music and I used to see, before Covid, a lot of concerts. You know, music is my life. I love music, like everybody, or like mostly everybody. And I'm mostly interested in new music. And that's why I like WERS, because it exposes me to a lot of new music.

NO: I mean, looking around you definitely keep it alive with the decorations, the plaques, I think you have some flavors with some clever names, too, right?

RR: Well, what happened was so, for example, Dee Snider from Twisted Sister, he's a friend and he said he wanted to have an ice cream for his kids, right? They all wanted to do that for their kids. So he told me the flavor and we developed a flavor called Twisted Delight. And my friend Glenn Hughes from Deep Purple, he wanted a flavor. We called it Deep Purple.

NO: Yeah that's a fun way to keep it alive and see the rock and roll roots today.

RR: Yeah, I mean, you see this store, you see all these pictures here. There's Chad Smith and the Chili Peppers, James Brown - James and me back in the 70s - that was a long time ago. And the Eurythmics first tour, Sweet dreams Are Made of This, we sponsored the Boston leg of that tour. There's a letter from Joe Perry from Aerosmith about the ice cream. And there's just different things that are fun. For me it was all fun.

A UNIQUE ICE CREAM STORE WITH AN UNEXPECTED START

RR: I think we're a unique ice cream store, I think that there's nothing really like it. We get people who say, 'oh, you're copying Ben & Jerry's,' but Ben & Jerry's opened two years after we opened. And they always came down to our shop in the beginning to see what we were doing. So we didn't copy Ben & Jerry's.

But I mean looking back at it, nothing was really planned. It was just happenstance. And it was just combining things that I enjoy in life and I've always wanted to do. I've always worked in things that I believe in and I enjoy. Music obviously is a major factor, all my life and in my life, and I kind of married it with the ice cream. And here we are!

This interview has been edited for length and clarity.