The Lemon Twigs at Great Scott

When in a family band, brotherly banter comes with the territory. When The Lemon Twigs played the Great Scott in Allston on Friday, there was definitely no shortage of humor. Throughout the show, brothers Michael and Brian D’Addario shared inside  jokes, looks, and laughs while on stage. When Michael spouted some Jimi Hendrix fun fact in between songs, Brian was right there to comment back: “Well, you know all about rock history don’t you?” 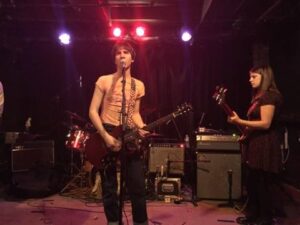 The show kicked off with opener Cut Worms, who wowed the crowd with acoustic guitars until around 9:15 p.m. At 9:30, The Lemon Twigs took the dimly lit stage and opened with their hit song, “I Wanna Prove to You,” getting fans moving right away. The scattered crowd immediately rushed towards the stage, as frontman Brian flailed around and whipped his hair to the 50s pop inspired record. Brian and Michael were also joined on stage by bassist Megan Zeankowski and keyboardist Danny Ayala.

The band is young, which showed on stage through an energy and excitement that kept the crowd entertained from beginning to end. At one point in the show, when Michael left the drum set and came forward to sing a few songs, his red Converse came untied. Luckily, a fan in the front row was more than happy to tie it for him, while he grinned on and the rest of the band chuckled behind him. The Lemon Twigs also played their rendition of “Love Stepped Down”, which was originally written by the D’Addarios’ father. Michael prefaced the song, ”This next one was written by our dad in 1976, when he was a young man. Now he’s an old man, an old, old man.” 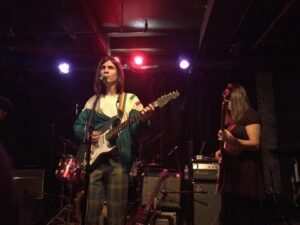 Michael and Brian took turns fronting the band and playing the drums, each brother bringing a unique stage presence when they stepped up to the mic. Brian flipped his hair and grooved to the beat, while Michael preferred kicking and jumping ferociously around the stage, almost to the point of falling into the drum set. Either way, the crowd loved it, cheering with every hair flip and high kick. The Lemon Twigs performed with the perfect mixture of teenage charm and awkwardness, mixing aesthetics that were new and old. This even showed in the outfits each individual wore, from the red Converse and plaid blazer combo that Michael donned to the tweed orange pants on Brian. The guitars looked as though they were from another time as well, and the whole set gave off an old school, nostalgic vibe.

The band played until around 10:45 p.m., closing with the song “Queen of my School.” Once they were off stage, and mingling with the crowd, I got the chance to ask Michael one question: “Why the Lemon Twigs? What’s the story behind the band name?” His response simple: “I really don’t know. Brian came up with it.” He then handed me an extra set list and continued to pack up the equipment.

WERS Welcomes at the Great Scott