The Japanese House Premieres New Single “Somebody You Found” 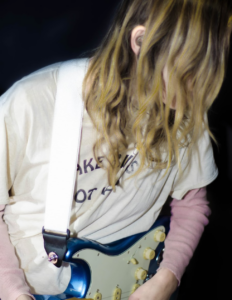 21-year-old Amber Bain is the solo multi-instrumentalist behind The Japanese House. She recently premiered “Saw You In A Dream”, her second single from her forthcoming EP of the same name to be released on June 27th. Since the release of Swim Against the Tide in 2016, she toured non-stop across Europe and the United States, with two appearances in Boston. Her first time in the city was to play at Great Scott in November, and she came by WERS for her first radio studio performance in the US. Sincere and authentic, the soft-spoken musician performed tracks from her 2015 releases Pools to Bathe In and Clean.

“Somebody You Found” opens with the hum of Bain’s voice. This moves away from the previous serene and encompassing synth of Clean and Pools to Bathe In to more lush indie melodies and intricate guitar work. Even with lighter production, the sound maintains her signature atmospheric intimacy laid out in full by emotional conviction in her lyrics:

“My mistake, I made this about me and wrapped you around me like a blanket. I hate it, I hate myself… I’m not someone that you came looking for, I’m just somebody you found.”

The track descends in a mellotron-infused outro, fluxing over careful strings, harmonies, and the boom of George Daniel (of The 1975) featured on drums.

The Japanese House isn’t settling down anytime soon, geared up for a multitude of festival appearances including Reading & Leeds and Latitude in the UK, as well in the US at Lollapalooza Chicago and Outsidelands San Francisco. To find out more about her upcoming album check out her Facebook!

Photo: The Japanese House live in studio at WERS by Zachary Fask