Riding the Waves with Surfer Blood 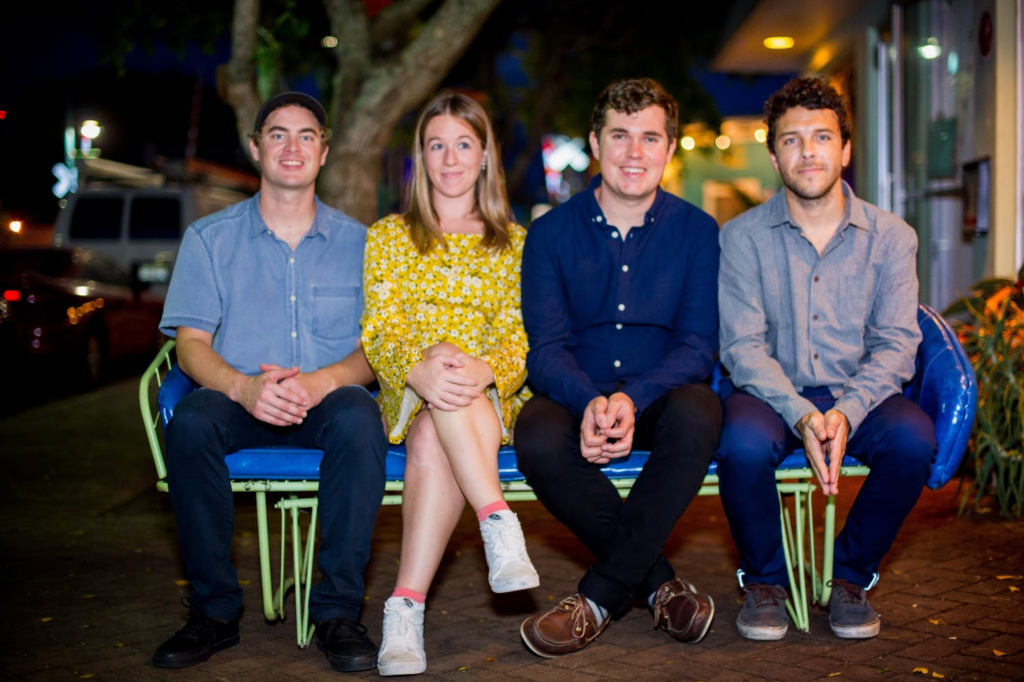 Gearing up for another tour, this isn’t Surfer Blood’s first swell, and they’ll be riding into Boston at Great Scott on April 19th. The “Weezer meets Beach Boys”-esque outfit came to notoriety with their debut record, Astro Coast in 2010 and were soon picked up by Warner Bros Records. Through touring and several albums later, they eventually moved to independent label, Joyful Noise Recordings in 2015. Surfer Blood experienced major changes since, with the passing of longtime guitarist Thomas Fekete and the departure of bassist Kevin Williams. In early 2017, Surfer Blood released their fourth LP Snowdonia, marking this transformation and accompanied by the new lineup of Mike Mccleary and Lindsey Mills. Though darker, and seemingly more melancholy, the album reflects not only artistic maturation, but the maturation of the human spirit.

The album is the first that frontman John Paul Pitts mixed on his own since Astro Coast. In regards to his hopes for Snowdonia, “It turned out sounding really good. I was really happy with it, I really love the flow of it front to back. It feels really good to know that something sounds exactly the way it was in your head when you imagined it.” Life, love, death, and the human experience all inform the creative process. There’s a special complexity between maturing not only as a songwriter, but as a musician. Pitts highlighted the opportunity to tour with a lot of amazing bands, and the importance of being constantly exposed to new music as an influence, “We all emulate music that really moves us. So far, we’ve released four LPs, they’re all very different from each other and stand on their own. But it’s obviously all Surfer Blood and has that thumbprint. We’ve never made the same record twice, and that’s something I’m proud of.” Snowdonia captures a range of unique and nuanced moods through it’s flexible instrumentation and a pensive disposition. It was a fresh start, with Pitts writing for the first time without Fekete and Williams.

Described by Pitts as the one of the centerpieces of the record, in the most simple explanation about, “getting older, and putting things in perspective.” The single “Six Songs in F or G” combines the classic Surfer Blood angst-ridden guitar riffs with more purposeful melodies that touch on heavy motifs of heartache, self-doubt, and grief. The song transforms into new hope with mellow, twangy reverb. Pitts cites aging as an overarching theme of the album. Surfer Blood’s debut single, “Swim” grabbed critical attention in 2009 shortly before the release of Astro Coast. Fast forward seven years, and the singer turned 30 last year. “I’ve been to 21 countries and I’m just so grateful, of all the opportunities, and experiences. I got to have a lot of fun when I was in my 20s, see a lot of things, it really opened my mind, it completely changed the way I look at the whole world. With everything that has happened, lineup changes, some tragedy along the way, it’s definitely sort of reflecting on what a crazy trip this has been.”

Music illuminates the strength that comes with storytelling, and it is an art that has an unmatched ability to give people hope, whether it be the creator or the listener. “Especially at a certain age, music helps you get through the tougher parts of adolescence. The fact that Surfer Blood could be that to a highschool kid is really inspiring, it keeps me going, even when things are really hard or not working out the way you hoped they would. The opportunity to mean that to someone is incredible, because I know how much it actually means when you are that person.”

Pitts is filled with so much more than gratitude when speaking about the late Fekete, “Thomas was just one of those people, he had a personality I just can’t explain it… The funniest person I knew, the most optimistic person I knew… I’ll always be thankful to Thomas for being that person… Now we’re trying to keep that spirit alive, keep that momentum going, he was just one of those people was sort of the accelerator, and I’m trying to be that person for the band too.”

Embarking on an east coast tour, ending on April 29th in West Palm Beach, FL, the band isn’t putting on the breaks anytime soon. “Mike and Lindsey are amazing musicians and the least dramatic people in the world. So it is really nice touring with them, and it stills very much like I’m up here with my family.” On a more lighthearted note and in regards to post-tour plans or special stops along the way, he laughs a bit recounting Surfer Blood’s last show in the bean, “After we’re up in the Northeast, we’re coming to Boston, which is great, we played at Great Scott once before. Honestly I ate so much Indian food before I went on stage, felt like there was a weight on me the entire time so I won’t make the same mistake again.”