A ginormous crowd of people swarmed the Style Stage on the night of Day Three of Levitate Music and Arts Festival in anticipation of seeing Michael Franti & Spearhead:

A project whose genre can only be described by a comprehensive list of nouns: hip-hop, reggae, funk, jam, ska punk-you name it and Franti does it.

Three minutes before the show began, the screen behind the stage started a countdown to alert audiences of the impending show. The speakers of the style stage started blaring "September" by Earth, Wind, and Fire, and automatically I knew this was probably going to be one of the most fun shows I've ever reviewed.

The countdown screen also included prompts for passing the time, telling the audience to hug someone next to them, put their drinks in the air, and do other fun tasks to keep the crowd alive and full of energy.

Once the countdown was complete, a video of Michael Franti's baby son Taj made my heart absolutely melt.

The video, voiced-over by Franti himself, was dedicated to baby Taj. In the video, Franti spoke to Taj, telling him that, while the world is full of evil, hate, and negativity, "earth is still an incredible place," and we should all "stay human."

Many artists typically try and have some sort of political message or message of hope and positivity in their performances.

But Franti centered his whole set around his "stay human" mantra, always keeping on the brighter side of life.

He dedicated his song "We Are All Earthlings" to anyone who "loves nature," which earned a rousing cheer from the crowd. About halfway through the show, Franti stepped down into the crowd and asked if anyone would like to come up and sing with him. He chose a seventeen-year-old girl, who wasn't shy about belting out a song with Franti right next to her and in front of thousands of people.

Toward the end of the set, things got a little crazy--but in the best was possible. Franti climbed onto the nearby bathrooms and continued to perform flawlessly. The crowd was electric, feeding off of his positivity and happiness. I know that I for-sure left Franti's set with my heart a little lighter, and my spirits lifted. 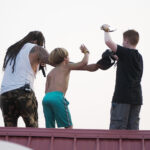 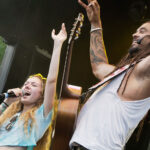 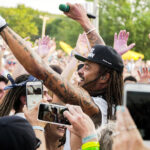 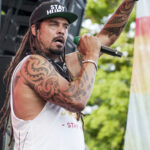 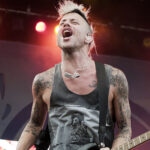 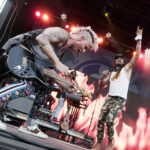 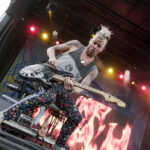