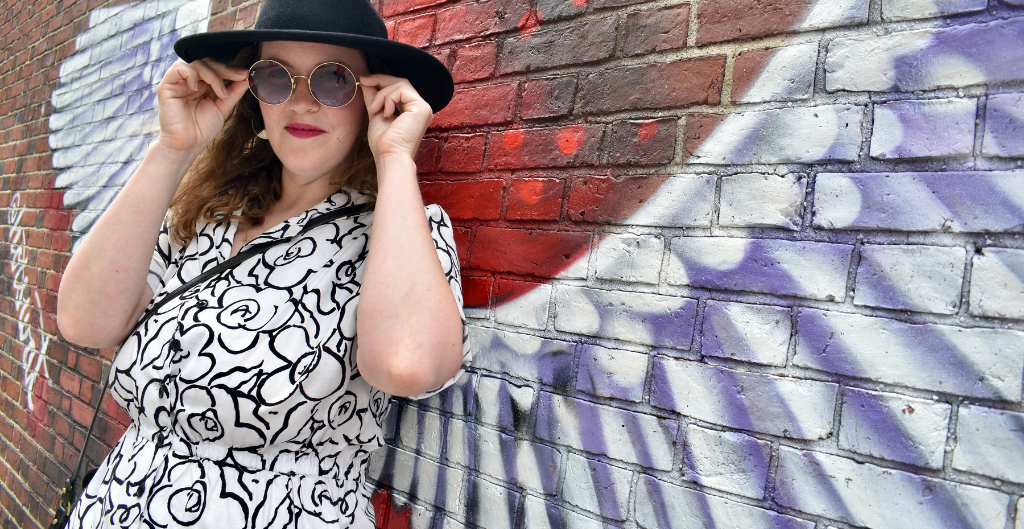 In this interview, Boston artist Kit Orion talks with staff writer Mina Rose Morales about the origins of her moniker, why she characterizes her music as similar to painting, and more.

SO, I’M GOING TO START OFF WITH VERY SIMPLE QUESTIONS. SO FIRST OFF, WHAT IS YOUR NAME?

WHAT IS YOUR STAGE NAME?

KO: So, ok, there we go. My stage name is Kit Orion. It’s Kit, like the drum, and Orion, like the constellation.

HOW DID YOU COME UP WITH THAT? I LOVE THAT.

KO: Thank you. Kit also comes from Kitty, my great grandmother’s nickname. She was Katherine. I liked the idea of honoring her, and you know shortening it to my own thing.

I’m also really into drums. And Orion— I was really looking at all sorts of different astrological names before even Kit Orion came to be. I was looking for the right one and then I really liked the idea of it being associated with my real name. And O’ Brien is so close, so it really just came to that. And it wasn’t taken! There’s so many names that are already taken.

IS THERE ANYTHING ELSE ABOUT THAT CONSTELLATION THAT DREW YOU?

KO: Well, I mean to be honest my favorite one is Artemis because she is the warrior, but Orion (huffs)... Well, you know, I’d have to get back into my classics brain to remember what about him. Because I think he was actually in battle with Artemis. So it was kind of like ‘If I cannot have her, I’ll just take him’ (laughs).

WHAT WOULD YOU SAY IS YOUR PROFESSION?

KO: I consider myself an overarching artist. And I’m a freelance DJ and a musician currently as my profession. So, I DJ events and weddings— whatever is clever.

Also, I sing in a band that is local that’s called The Baker Thomas Band. They play at the Toad the first Thursday of every month and I sing vocals. I do vocals with them as like a little job. It’s very fun, it’s very laid back. So that’s one of my jobs, too.

And I’m a teaching artist. So for a long time I taught at an after-school program as a performing arts teacher. I’ve since let that go but occasionally, I’ll do lessons. I did just recently, through the Peabody Essex Museum up in Salem, taught a songwriting class to elementary kids in the center.

THAT’S AMAZING. WE NEED MORE OF THAT. BECAUSE, YOU KNOW, IN THE PUBLIC SCHOOL SYSTEM, WE HAVE OBVIOUSLY THE ELECTIVES, BUT ONCE THEY TAKE THOSE OUT BECAUSE OF BUDGET CUTS OR BECAUSE THE CURRICULUM OR SOCIETY DOESN’T APPRECIATE IT, THEN YOU REALLY KNOW WHAT THE VALUES ARE AND WHAT’S NOT ACCESSIBLE.

KO: Yeah. There [were] a few teachers in my life that changed me and gave me the idea that I can do any of this. So knowing how special it was, and how rare it was, and knowing how lucky it was for me to have anything like that is special. You know, I had such a great education from such a few select people. And I still remember them, and I’ll never forget them.  One of my previous students, she already came out with an album.

It’s just so cool to make a connection and to just to show kids that they can be who they are. And to explore what they love and give them any kind of access to that, is really special. But I’m not teaching very much. I’m looking for ways to participate in that way again.

WHAT TYPE OF MUSIC DO YOU PLAY?

I THINK A DESCRIPTION IN YOUR OWN WORDS. A DESCRIPTION OF YOUR MUSIC THAT WOULD BE THE BEST, ESPECIALLY IF YOU’RE AN OVERARCHING ARTIST AND YOU’RE VERSATILE… SO IN A FEW WORDS, NOT IN LIKE A PARAGRAPH (LAUGHS).

KO: I look at it like painting soundscapes. I take samples, and then I make them into instruments, and then kind of create an atmosphere, and then I write songs with them. So, I guess atmospheric soundscapes with a singer-songwriter approach over it.

FOR PEOPLE WHO ARE MORE BY EAR, CAN YOU DESCRIBE WHAT THAT SOUNDS LIKE?

HOW DID YOU GET INTO MUSIC EARLY ON?

KO: I started when I was nine years old, singing in this cathedral choir in Worcester, Massachusetts. And that’s where it started. It was this big intimidating choir.

I grew up doing classical music. That’s how it started and from there it evolved in school, and to all kinds of music, like jazz. And I picked up percussion and from there on it was like, you just couldn’t stop me. I was such a nerd. I was so into it.

KO: It was the best. I was in different music groups and stuff in school so much so that I didn’t prioritize my schoolwork. And they would be like what are you doing? And, I would be like I’m doing this. So, that’s how it all started.

OK, TALKING ABOUT SCHOOL… BECAUSE YOU DID MENTION THAT THERE WERE A FEW TEACHERS WHO INFLUENCED YOU AND BASICALLY HELPED YOU ON THIS PATH… THAT GOES TO MY NEXT QUESTION. WHO WERE YOUR INFLUENCES? I ACTUALLY WANT TO KNOW THOSE TEACHERS AND THEN ARTISTS OR PEOPLE WHO YOU GAIN INSPIRATION FROM.

KO: There are two people who directly influenced me as a kid and throughout my life. They took me under their wings. One, his name is Randolph James. He was my choir director at that church. He is an organist and choir director, and [an] eclectic human being.

And then Ru Zelda Severin. She was my music teacher starting in I think I was in fifth grade. And through the time I was in ninth grade, before I moved away, she taught me so much. She was our choir director at school, too. She was just a badass. She taught us jazz roots and that kind of stuff, and I was in the classical world. She kind of taught me almost everything else there was to know. And she saw me for who I was because I was very shy, but she pushed me, as did Randolph, to come out of my shell. She taught me a lot. So, they are my favorite youth inspirations.

And as for artists. Currently, Sufjan Stevens, James Blake… umm St. Vincent is someone who always comes up for me. Recently, someone named— her solo project is called Kalbells, but she’s a rebel bucket umm she’s just so free and creative she’s just not bound to any genre so I’m very intrigued by that. I would say a lot of those people push the envelope in that way.

HOW DOES BEING A LOCAL ARTIST INFLUENCE YOUR WORK?

KO: Well, my community is very important and integral to my doing what I’m doing.

The people that I’ve met are very supportive and encouraging of each other’s work.

Really the reason this album exists, this first album, and the next one I’m working on, are through the encouragement of my friend Jessica. Her name is Jessica Kion and her artist name is Justice Cow. She’s from the band Bent Knee, which she and her husband just left that band, but that whole community is kind of like a center point for me.

And Jess, she called me up during the pandemic and asked if I wanted to start showing up and start contributing to the songwriting group. So, we would have like a prompt, and then we would have to write a song and show up virtually every week with a new song. And so she’s super innovative in that way and [holds] me accountable. And [we] hold each other accountable.

So, there is a small group of friends — which we continue to do it, to this day — but we have breaks here and there. Six out of the seven songs from my album are from that songwriting group.

The Cambridge community specifically, too. Everybody just really tries to bring each other [up], you know. I’ve not encountered anyone who’s trying to climb on top of each other.

WHY SHOULD PEOPLE SUPPORT LOCAL MUSICIANS?

KO: Well, I think everyone starts somewhere. We are all trying to contribute to the world. And if we are supported in our art as local artists, we’re going to make the community so much richer if we’re supported. Arts [are] important.

IF YOU COULD USE THREE WORDS TO DESCRIBE YOUR MUSIC, WHAT WOULD THEY BE?

KO: (Pauses to think) I’d say vibey, atmospheric… You know how [with] impressionist artists, it’s like left to the viewer to make an impression? I’ve always liked that and I kind of feel like I am painting…

I THINK I HAVE AN IDEA OF WHAT YOU’RE TRYING TO SAY. YOU KIND OF SAID IT IN THE BEGINNING WHEN YOU DESCRIBED YOUR TYPE OF MUSIC.

KO: Right. I guess we can say genre-bending, but it’s such a big term, so I don’t know if I like that either. But F-it, we can just say genre bending. So, vibey, atmospheric, and genre-bending… Why the hell not?

NOW, WE’RE GOING TO GET TO YOUR PERFORMANCES… WHERE HAVE YOU PERFORMED?

KO: So, I really just started performing. The first live performance I did was last year, 2021, at The Burren, which is on Davis Square. I’ve played at The Jungle a couple of times. And most recently, at the Sinclair opening up for my friends in Bent Knee. That was awesome.

DO YOU HAVE ANY PROJECTS COMING UP?

KO: Yes, I’m working on my second album right now and that’s going to be out in the fall. That's the plan.

DO YOU HAVE A NAME FOR THE ALBUM ALREADY?

KO: I don’t. And neither [do I have] names of the songs, to be honest. Nothing has a name. But I’m working on this album, and I did make a music video for it, too. So that’s going to come out with a single. And that’s very exciting! First music video!

AND, THEN, THE LAST QUESTION: FROM THE SONGS THAT YOU HAVE CREATED, WHICH IS YOUR FAVORITE? OR YOU CAN NAME A FEW.

KO: I think my favorite one right now is called “Florida State Road 430.” It does feel like me the most. It’s like a softer song and it’s a song about a family friend who passed away. And it’s kind of like a dream scenario, where we go on a road trip.

KO: Yeah, it’s a dream scenario. It’s a special song, and I think that’s my favorite one.