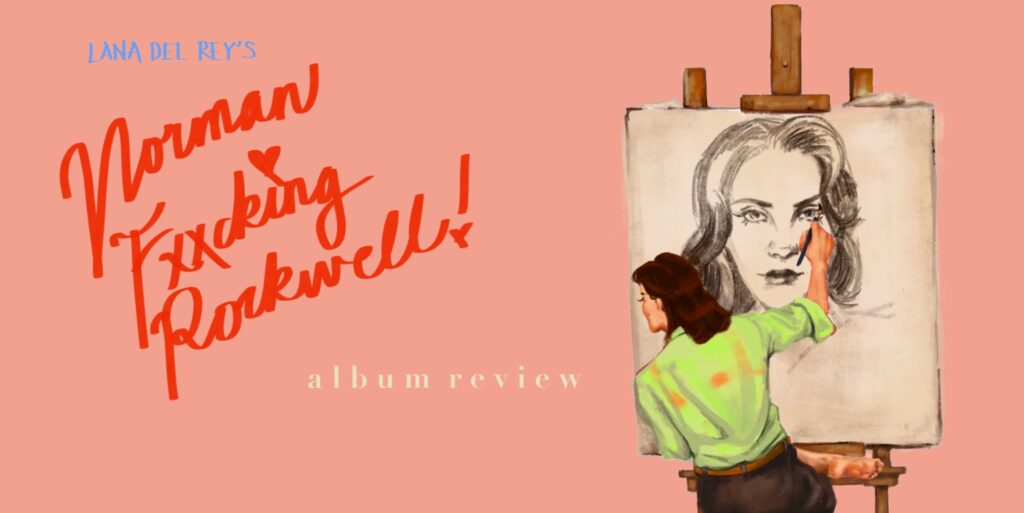 Is it really that shocking that Lana Del Rey has emerged as the poet laureate of the apocalypse?

Ever since her 2012 debut Born to Die, the music of the 34-year-old singer/songwriter has been defined by stories of loss and heartbreak filtered through the lenses of nostalgia and a utopian America composed of the country's classic signifiers - the stars and stripes, Pepsi-Cola, Marylin Monroe. It's the type of picturesque America that painter Norman Rockwell spent decades depicting in his work. But with Lana's fifth album, aptly titled Norman F-----g Rockwell!, she disrupts this concept of America, leaving the past and reckoning with modern political turmoil, climate change, and the national feelings of disillusionment in what was supposed to be the land of the free. As a result, it is her career-defining masterpiece.

Lana's music always has an intimate sense of place attached to it.

From Coney Island boardwalks to the Chateau Marmont Hotel in Los Angeles, her music is an instant journey to wherever she ends up. Norman F-----g Rockwell! finds itself along the Southern Californian coast - Newport Beach, Laurel Canyon, Malibu. Working with producer Jack Antonoff, the two conjure the spirit of '60s and '70s Californian classic rock in the album. Coded into the album's DNA are Joni Mitchell's piano ballads and folk tunes, the pristine recordings of bands like Eagles, and the long-winding psychedelia of The Doors. However, Lana's focus is always on the present, on her relationships, emotions, or in prophetic strokes of lyrical wisdom.

Perhaps no other song on Norman F-----g Rockwell! ties together the album's themes better than "The Greatest" does.

Rendered as a '70s classic rock ballad with soaring vocals and ripping guitar solos, the song is Lana's send off to an America she no longer recognizes. As flames destroy Californian forests and the ideals of America seem to be crumbling down, the singer comes to terms with the chaos surrounding her. "I'm facing the greatest/the greatest loss of them all/The culture is lit and I had a ball/I guess I'm signing off after all," sings Lana. It feels as if nobody has been able to articulate the insanity of life in 2019 like she has. "The Greatest" is not just one of the best songs from the album, but one of the best tracks Lana has ever written.

Lana doesn't forget to bring the focus of the record to the personal as well.

On "Mariners Apartment Complex," Lana challenges the image many cast of her since the beginning of her career - that of a damsel in distress overwhelmed by emotion. "I ain't no candle in the wind/I'm the bolt, the lightning, the thunder/type of girl who's gonna make you wonder/Who you are, and who you've been." Lana writes a love ballad that repudiates the role she was believed to play, recasting herself on her own terms: "Don't look too far/Right where you are, that's where I am/I'm your man."

Later tracks on the album return to the tales of love and loss that Lana fans have grown to expect from her.

Mid-album highlight "Love Song" has a title that describes it perfectly, a gorgeous song dedicated to Lana's lover. "The taste, the touch, the way we love/It all comes down to make the sound of a love song." The track's production reflects these bare essentials of love Lana writes about. Whereas past tracks might include bombastic orchestras and trip-hop beats, "Love Song" features just Lana's voice, piano, and violin, showing a level of vulnerability rarely featured in her work.

"California," on the other hand, is a towering ballad dedicated to a former lover Lana would do anything to reunite with. "We'll do whatever you want/Travel wherever, how far/We'll hit up all the old places," sings Lana. It's a piece of songwriting that shows Lana at her absolute best, heartbreaking and arresting in equal measures.

Norman F----g Rockwell!'s greatest moment, however, is one that seems like it could go on forever.

"Venice B---h" is the most ambitious song Lana Del Rey has made to date. A nearly ten-minute psychedelic odyssey, Lana conjures up the feeling of a hazy, languid summer that stretches out into infinity. Over a bed of lush guitars, symphonic violins, and beautifully atmospheric synths, Lana opens the track with what initially appears to be a folk ballad set amidst a timeless Southern Californian summer.

However, as the track approaches the two-minute mark, it morphs into something else entirely. Guitars get fuzzier. Lyrics sink into oceans of sound before floating back to the surface. Synthesizers improvise until it seems they glitch and malfunction into chaos. It is easily some of the most incredible work of her career. Every second of the song's 9:47 duration adds a new element, a new detail to notice. There are extra dimensions to what already is a vivid, enrapturing song.

Amidst the chaos felt on the album, amidst the heartbreak, amidst the loss, one thing remains for Lana - hope.

As the album closes, Lana dedicates five minutes alone with only a piano to what might be her most personal track to date, the incredibly titled "Hope is a Dangerous Thing for a Woman Like Me to Have - But I Have It."

Lana sings a surreal, introspective track about her personal demons and the struggle to overcome them. There's imagery reminiscent of Sylvia Plath, paranormal communications, and references to her battle with mental health and alcoholism. The song is one of the darkest, most affecting tracks Lana has ever made. But, as the song ends, Lana insists that even with all that she has lived through, hope still remains.

Norman F-----g Rockwell! is a true redefinition of Lana Del Rey. It's an album that shows her turning her eye not only toward the world, but to her own life. It uses her songwriting gifts to perfection. Toward the album's end, Lana sings about her obsession with writing "The next best American record."

Now, it's clear: Lana has done it.

The James Hunter Six – Whatever It Takes Album Review