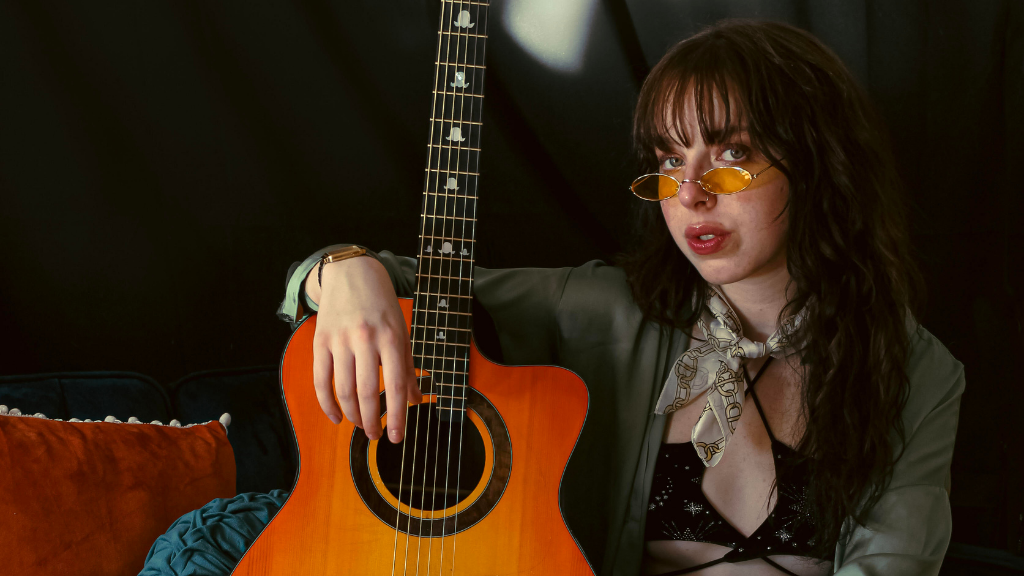 In this interview, Berklee School of Music singer-songwriter Abby Davis talks with staff writer Kira Weaver about growing up with her music, finding out she has nodes, and her biggest musical influence: her family.

HOW DO YOU THINK GROWING UP IN NORTH CAROLINA INFLUENCED YOUR MUSIC?

AD: Well, my parents are both musicians. My dad plays drums and my mom’s a singer and they played in a band together before I was born. So growing up with them definitely influenced my style of music.

I grew up listening to people like Tom Petty and Fleetwood Mac. My dad played a lot of jazz around the house and then my mom was more [into] the whole 80s cheesy shit like Duran Duran, but they come together on artists like Steely Dan.

Having my parents be so into music had a strong impact.

I feel like the live music scene in North Carolina is pretty nuts. Like the Bluegrass Festival happens there, and the cafes downtown always have live music going on. My dad plays gigs all the time, around three times a week. So [that] definitely influenced me as a musician and the way that I perform…I kind of grew up performing.

SO, YOUR PARENTS TAUGHT YOU GUITAR?

AD: My parents’ friend in the band actually taught me. His name’s Ken, I look up to him a lot— he taught me everything. I was always a singer, though… I would always sing along to my mom's songs.

YOU MENTIONED THAT YOU GREW UP PERFORMING ON THE LOCAL SCENE IN RALEIGH, WHAT GIG STANDS OUT TO YOU AS BEING THE MOST IMPACTFUL FROM THAT TIME?

AD: I played a show last summer in July at this place that I grew up playing at called the Berkley Cafe, and I remember it was just packed, it was such a good night. That gig was just so good, so many people came and the song swerve just —— perfect.

I had a vocal injury last year, and it was my first big gig I had done since. I was really nervous because if I lost my voice after that show it meant I would have had to go back and get further care. The show was sort of my make-or-break in telling if I was healed or not. And my voice ended up being fine.

DO YOU MIND TALKING MORE ABOUT YOUR VOCAL INJURY?

AD: Yeah, I got nodes back in February 2021. They were really tiny, which was good.

STILL, I WOULD’VE BEEN—

AD: I was scared. I was really upset. Just because I was 19, which is so young.

AD: I feel very lucky to have always kind of known what I want to do with my life. I know that a lot of my friends back in North Carolina don’t play music and a lot of them didn’t know what they wanted to do. I feel lucky. All musicians that get the opportunity to study music should feel that way. My mom will tell me that she's like fifty and still doesn't know what she wants to do with her life. So yeah.

It was really scary to get that suddenly, like a threat, to get that taken from me. My nodes were so small, I couldn’t even have surgery on them. I just went to vocal therapy and it helped a lot. My vocal therapist was actually friends with my mom’s vocal therapist, [from] back when my mom had a vocal injury and got surgery. Honestly, it made me realize how common vocal injuries are. They are so common. All the exercises I was doing in therapy too. All singers should be practicing [them], injured or not. I’m glad I got to learn what it takes to take care of my voice.

CHANGING MOODS, LET’S TALK ABOUT THE LAST PIECE YOU PERFORMED, AN ORIGINAL SONG NAMED “ACHOO!” BEFORE PERFORMING, YOU LOOKED UP AND SAID ‘THIS IS AN ANGRY SONG’.

AD: Yeah, so our good friend Jimmy Haines was over at our place helping me on a project and accidentally made the beat you can hear in the song, and I was like ‘That’s a really cool riff.’

After that, it all came together within a week. I got my friend Jacob Schneiderman to play bass on it. I got my friend Isaac Helgestad to play guitar. I remember writing that song and treating it like a hot potato. Just like ‘Are we gonna finish it?’ ‘Alright get it out!’

It like all happened. “ACHOO!” happened within a month. The entire song, from start to finish.

WHAT WAS THE FIRST SONG YOU PLAYED?

WHEN WAS THAT WRITTEN?

AD: That was written when I was jamming at home with one of my good friends named Aaron Huntley, he and I kind of grew up together. He plays bass. But yeah, he and I were just like jamming together in my room and collectively decided ‘Let’s just see if we can write something real quick right now. So I sang “I think I've had enough,” I just kind of improved the melody on the spot, and his response was ‘that’s good, keep going off that.’

Then he left and I came back to Boston and wrote the verses. I got my friend to play guitar on it, this guitar riff is sick. I’m really excited.

THEN YOU SAID THE MIDDLE SONG YOU’VE BEEN SINGING SINCE HIGH SCHOOL?

AD: Yeah, “Take It All.” I wrote that song when I was sixteen.

IT’S GROWN WITH YOU.

AD: Yeah, “Take It All.” I wrote that song in a study hall. Little sixteen-year-old emo Abby thought that the whole world was ending.

WHAT WAS IT ABOUT?

AD: I was just sad, I guess. I went to this high school freshman through junior year, and I ended up switching my senior year. It was a tiny charter arts school and everyone there just was really self-invested. Versus at Berklee, I feel like we’re all pretty supportive of each other.

I FEEL LIKE THERE’S A DISTINCTION BETWEEN PEOPLE THAT WANT TO USE MUSIC AS A WAY TO PLATFORM THEMSELVES, AND THEN THERE ARE THE PEOPLE THAT JUST WANT TO MAKE MUSIC-

AND WANT TO DEEPEN THEIR UNDERSTANDING OF THE ART THEY ARE CREATING.

NEITHER IS WRONG, JUST DIFFERENT.

AD: Right, and there’s a learning curve to figuring out which one is you.

But yeah, I hated that school. So I wrote “Take It All,” and that was around the time I met Emily and Danny. And Danny was like “Abby, you really gotta release music.”

So I was just writing shit, and Take It All became the first song I showed people. The song is very close to me because it’s kind of like the bridge that got me from my comfort zone to, “alright, I’m actually gonna do this music shit, I’m gonna stick to it and do it.”

WHO DO YOU THINK YOUR BIGGEST MUSICAL INSPIRATIONS ARE?

AD: I don’t know….I love Christine McVie from Fleetwood Mac. I love Stevie too, obviously, but I love Christine. I love her voice and all of her songs with them.

I love a lot of funk, like Gwen McCrae, The Gap Band, and I forget her last name but Angela… (Starts singing “People Make The World Go Round” by Angela Bofill)

I also love Tom Petty, I grew up with him. He’s my earliest memory of music.

WHO DO YOU THINK YOUR BIGGEST NON-MUSICAL INSPIRATIONS ARE?

AD: My mom, even though she's a musician. But yeah, my mom. My dad too, my dad’s awesome. My dad’s like my favorite person— I love my parents. My sister’s cool, I have a pretty cool family. They are probably my biggest inspirations.

And Emily Schialdone. (Looks over at her roommate Emily).

LASTLY, DO YOU HAVE ANY UPCOMING SHOWS IN THE AREA?

AD: I have a show with my friend, Laney Lebovitz on April 21st in the Steve Heck Room at 1140 Boylston St. I have a show on April 30th, the day after my birthday, over at the Horse with Isaac.

And then, I have a small festival in Raleigh in late May!