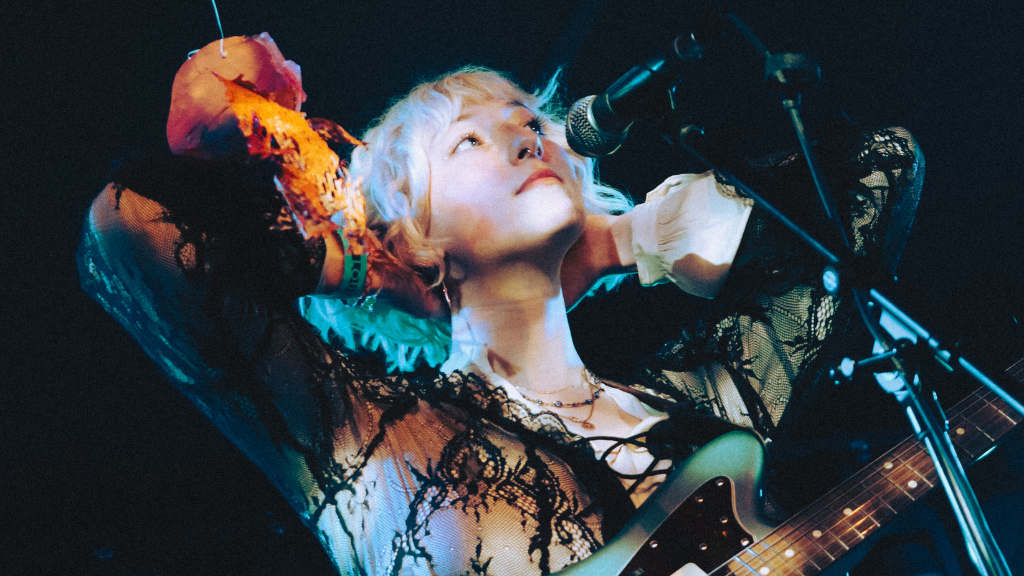 In this interview, Berklee School of Music indie-rock artist Trophy Wife talks with staff writer Kira Weaver about her new EP Bruisers, drawing inspiration from the local community of artists around her, and more.

WHAT WAS THE ORIGIN BEHIND YOUR ARTIST NAME, TROPHY WIFE?

Trophy Wife: I was 18 and I was trying to think of something because I really didn’t want to use my actual name, McKenzie Lazzetta — lots of Z’s. And I wanted something fun, and Trophy Wife is kind of funny and ironic to me in that way.

SO YOUR LATEST EP, BRUISER, IS THERE A SIGNIFICANCE BEHIND THE TITLE?

TW: Yeah, so when I was trying to name it. I was trying to think of a word that encompassed the feeling I wanted it to have, and I thought Bruiser was good cause it’s somebody who beats people up. And I thought the songs are emotionally beating me up. You know?

YEAH, I FEEL LIKE WHEN LISTENING TO IT THERE’S THIS COMMON THREAD OR STORYLINE WHERE YOU ARE ALMOST EXPERIENCING THESE STAGES OF EMOTIONS.

TW: It’s funny because I didn't actually write the songs intending for them to tell a story. I originally wrote them separately. “Knife Fight,” I wrote when I was 18. It was one of the first songs I ever wrote. I only started writing once I got to college cause I looked around at Berklee and was like ‘everybody's writing songs… I didn't know I was supposed to do this.’

So I started writing freshman year, and when I wrote “Knife Fight,” it was probably the second or third song I ever wrote. And I released it under the name “Guts” when I was 19. I wanted to rerecord it for this EP because the form I had recorded it in originally didn't feel like me anymore, and I wanted to do justice to it. Then, I wrote both “My Own Damn Bed” and “Involved” during the pandemic. I just had a lot of time.

WHAT LED YOU TO END UP GROUPING THEM TOGETHER FOR BRUISER THEN?

TW: I hadn’t released anything in a while, and I was in a transitional phase in my life. Especially with my music, nothing I had released in a while felt like what I wanted it to sound like. So I ended up showing a handful of songs to some of my roommates at the time, and the general response was ‘Oh you should record these ones.’

Honestly, until I released it, I didn't realize the common thread between them. It was only when people started telling me I was like ‘OH, no, you’re right!’ ‘That’s true!’ It was like I wasn't self-aware until that point, to see that they had something in common.

The whole time I was recording it, I was like ‘I want this to feel like you got punched in the stomach’ a little bit. And it’s kind of all deflecting your feelings and trying to do the whole cool girl trope. The whole ‘Oh, I don’t care,’ ‘It’s chill,’ ‘I drink beer.’

LIKE THE IDEALIZATION OF 'YOU CAN SAY ANYTHING TO ME…'

TW: And it doesn’t matter.

'IT WON’T AFFECT ME.' BUT INTERNALLY YOU’RE BRUISING.

TW: Exactly, no one is actually like that. The ‘Nothing bothers me’ mentality. And okay, maybe that's fun for you but I'm sure that's not helping you. And think everyone’s done that in their life, tried to be the chill girl. But after a while, you realize ‘Oh, that’s doing me a disservice and the people around me a disservice.’ Because then you are just upset.

SOMEONE OPENS YOUR SPOTIFY AND PUTS ON HEADPHONES… WHAT TYPE OF PERSON DO YOU SEE LISTENING TO YOUR MUSIC?

TW: (Laughing) Umm… honestly, I have no idea!

WHO DO YOU HOPE THEN?

IT’S THE PERSPECTIVE YOU’RE WRITING FROM.

TW: Yeah, it just makes sense. I want a man to try to explain what I'm talking about though.

HAVE YOU HAD ONE OF YOUR MALE FRIENDS LISTENED TO BRUISER FOR THE FIRST TIME AND BEEN LIKE ‘WHAT DO YOU THINK I'M SAYING?’

I don’t know, I feel like I wanted to write songs about— I realized there are all these things we don’t talk about in music because I think that people get kind of obsessed with making things pretty and disguising gross feelings as beautiful. It just makes everyone feel like an asshole at the end of the day, because if we all pretend that we don’t feel ashamed or that we don’t feel the need to be chill and pretend and then just by ourselves think ‘Oh my god, I’m the only person being an asshole right now’ When it’s EVERYONE.

I hope it’s people like me when I was trying to figure it out. I’m still figuring it out. And when they hear it they are like ‘Okay, someone else is being dumb.’

IF FIVE YEARS AGO YOU WERE ABLE TO LISTEN TO THE YOUR CURRENT DISCOGRAPHY, WHAT DO YOU THINK SHE WOULD TAKE AWAY FROM IT?

TW: I think that I was really stubborn at the time. So I would’ve listened to it and been like ‘So true,’ and then [gone] back to doing whatever I was doing. Which, you know, I would love to be like ‘I would’ve changed my ways’ but that was five years ago, and I was seventeen. I don’t think a seventeen-year-old listens to anyone. I don’t know, I probably would’ve felt seen. Maybe been like ‘Oh yeah, me too.’

DO YOU FEEL LIKE YOU’RE CREATING THE MUSIC YOU THOUGHT YOU WOULD CREATE?

TW: I mean, back then I wasn’t even writing songs. Five years ago— Honestly, my intention was to be a jazz singer.

TW: Yeah, I thought I was gonna be a jazz singer and sing jazz standards.

THAT WAS GONNA BE YOUR LIVELIHOOD?

TW: No literally, I came to Berklee thinking I’m gonna be a jazz singer. I don’t know what happened.

YOU GOT SUCKED INTO THE BERKLEE TO DIY PIPELINE.

TW: They ruined me, the people with eyeliner. But yeah I did not think I would be writing songs. I thought I couldn’t for some reason. I wish I had been because then I wouldn’t have to figure out what my writing style is so publicly.

OUTSIDE OF YOU STARTING TO WRITE, HOW DO YOU THINK THAT WRITING WAS IMPACTED BY LIVING IN AN AREA SO CONDENSED WITH MUSICIANS?

TW: I’m very inspired by a lot of my friends and the way they write. Especially when I was first starting out, hearing stuff that my peers were doing in the genre and sort of going ‘Oh I feel like I could do that too.’

I think it’s also nice to have a creative energy around you all the time. It’s like a slap in the face at times, because everyone is so talented. But I think it’s good to be slapped in the face. If all the musicians here were alone, not near musicians, and were the best all the time, we might be assholes. I think also, you don’t have anything to look towards to grow if you’re not surrounded by people that do that for you. Not competing, just showing up and wanting to be better, it keeps you motivated almost.

DID ANY OF YOUR PEERS HELP YOU ON BRUISER?

TW: Yeah, on the record my two roommates, Mario and Micah, played. Micah played the drums and Mario played the second guitar part. Then my other friend Christian played bass. Christian and Mario still play in my band now.

The sound engineer is actually in a band with my friend Micah, so it’s all friends and mutual friends. I’m really lucky to have all of this moral support, my friend Gia even came just to stare at us.

DO YOU HAVE ANY UPCOMING GIGS YOU’RE LOOKING FORWARD TO AS WE WRAP UP?

Yes, I have a bunch of shows coming up! I have a show on April 20th at Tourist Trap, one in the works for April 22nd in Amherst with Dino Gala, another one on April 23rd at Turkey Temple, and then I’ll be playing at O’Brien’s on May 4th.

This interview has been edited for length and clarity,