The Vault of Soul: Prince

To celebrate Black Music Month, we are excited to be bringing back our Vault of Soul series by spotlighting a soul artist every Thursday of June. Step inside the vault to discover the life and legacy of some of the world’s greatest soul artists, both past and present. Continue reading to learn about Prince‘s music career and lasting influence.

Prince – known as His Royal Badness, or, for a moment in time, ‘The Artist Formerly Known As Prince’ – was born Prince Rogers Nelson June 7th, 1958 in Minneapolis, Minnesota. His mother was jazz singer Mattie Della Shaw and his father was musician and songwriter John Lewis Nelson.

Prince was named after his father’s stage name, Prince Rogers. This happened to be the same band his mother sang in as well.

By the age of seven, Prince wrote his first song, “Funk Machine.” Only a few years later, his parents would divorce; but the music seed was planted in him. Music being at the core of his DNA, Prince absorbed his maternal and paternal musical influences and became a self-taught musician.

He linked up with childhood friends, forming bands and performing in the Minneapolis area. Early on, he formed groups such as 94 East with future Revolution bandmate Andre Cymone as well as with the future frontman of the band the Time, Morris Day. 94 East formed in Grand Central in 1974.

By the age of 16, Prince fully committed himself to making music. He revealed in an interview that while doing a job search, no other occupation connected with him, and thus he decided to push as hard as he could to be a musician.

His hard work, discipline and determination would pay off. By the age of 17, he signed a three record deal with Warner Brothers. On his debut album, released April 7th, 1978 and titled For You, he produced, arranged, composed, and played all 27 instruments involved.

After his first album, For You, Prince dived into his second record, the self-titled Prince album, which was released on October 19th, 1979. It fused synth and funk-pop more than its predecessor.

During this time he also formed a backing band.

Hits off the album included,  “I Want To Be Your Lover”, “Why You Wanna Treat Me So Bad?” and “Sexy Dancer.” The album sold 3 million copies in the U.S.

His third album, entitled Dirty Mind, was released, October 8th, 1980. Unlike his previous two albums, Dirty Mind added more musical styles such as new wave and punk along with R&B as well as very sexually explicit lyrics. These lyrics would steer away some conservatives.

While his Dirty Mind album didn’t sell as much as the previous albums, it was critically acclaimed with singles like “Uptown”, and title-track “Dirty Mind” leading the charge.

Later, in 1981, Controversy – his fourth album – was released. It was both socially conscious and hypersexual. As if he had any spare time- also in 1981, Prince formed a band with his Grand Central bandmate, friend and drummer Morris Day called the Time.

On October 27th, 1982 Prince would release 1999, a double album. 1999 was the first album to break the top 10 on Billboard’s 200 chart. It sold 4 million copies in the U. S. featuring the hit singles “Delirious,” “Little Red Corvette” and “1999.” The title-track was a socially conscious global anti-war anthem which would be used decades after the song’s release.

In 1984, he starred in the motion picture Purple Rain and released a soundtrack album as well. Purple Rain sold 13 million copies in the U.S. and remained for 24 weeks at number 1 on Billboard 200 Charts. This album spawned the hits, “When Doves Cry,” “Let’s go Crazy,” and “Purple Rain.” Prince’s sound was solidifying and maintaining his unique blend of pop, funk, rock and edgy lyrics.

In 1989, he would record and release his 11th album on Warner Brothers records for the Batman soundtrack – a huge success. The following year, Graffiti Bridge, which was a sequel to Purple Rain, would be a film and his twelfth album.

His thirteenth studio album Diamonds and Pearls would be with his new band New Power Generation in 1991.

As the 1990’s proceeded, Prince and his label Warner Brothers would be at odds, with Prince wanting to get out of his contract and changing his name. 1992’s 14th album Love symbol includes the songs “Sexy MF,” “My name is Prince,” “Seven,” and “Morning Papers,” which were all commercial hits. In 1993, Warner Brothers released a greatest hits three-disc-album of Prince. Prince however wanted to promote an album of new material.

In 1994, Prince released as many albums as possible to get out of his contractual contract with Warner as well as wearing the word Slave on his face.  From 1994 through 1996  Prince would release five more albums including his 19th, titled Emancipation, on his own label NPG records. He would also get married to his singer and back up dancer Mayte Garcia. The two went on to divorce in 2000.

On January 29th, 1998 Prince released his 20th and 21st albums, Crystal Ball and the Truth. That next fall, Warner Brothers released The Vault from old friends for sale. In late 1999 Prince signed to a new record label, Arista, and released Rave Un2 the Joy Fantastic, to mixed reviews.

In May 2000 Prince would drop the symbol he became recognized by and reclaimed his name Prince again.

From 2007 until 2015, Prince released seven more albums, even rejoining his former label Warner Brothers in 2014.  In 2016 he would play in smaller venues with a stripped down show featuring him only on guitar and piano.

In April 2016, he postponed shows due to a case of influenza. April 14th, 2016 would be his final show in Atlanta, Georgia. He was found unresponsive at his Paisley Park home/studios April 21st, 2016, the cause of death was determined as an accidental overdose.

WHO PRINCE WAS INFLUENCED BY

The Godfather of Soul, James Brown was a huge influence early in Prince’s life. In an MTV interview, Prince told a reporter when he was 10 years old his stepfather took him to a show and young Prince was able to get on stage with Brown. Guitarists such as Jimi Hendrix and funk-rock hybrid bands of the late 1960’s and early 1970’s such as Sly Stone or Sly and the Family Stone were equally visible on Prince’s earliest albums. Also the music of artists such as Joni Mitchell was highly influential with Prince. According to Mitchell, Prince was easily visible to her in the front row as he attended her concerts as a fifteen year old.

Who didn’t he influence would possibly be a more appropriate question. Everyone from fellow guitarist rock Lenny Kravitz, pop artists Justin Timberlake,  R&B artists like D’Angelo and Janelle Monae, hip hop artists such as Andre 3000, and singer/ songwriter/guitarist H.E.R received the royal influence from Prince. This list doesn’t even include the numerous artists he collaborated and associated with like Sheila E., The Time, Andre Cymone, Vanity, Apollonia and many others.

“I Wanna Be Your Lover” showcases early Prince, complete with a falsetto. The lyrics, “I wanna be your brother, I wanna be your mother and your sister, too,” reveal a definite window into what awaited fans from a just barely 21-year-old artist. Released in November of 1979, this was an energetic dance floor mover and shaker track. It just missed the top 10 on the music charts although hugging it comfortably at 11 for two weeks in late January 1980.

Prince played all the instruments on this and most of his first albums. The mid-to-late 1970s was filled with dance anthems, but this track had not your usual monotonous beat or lyric. Synthesizing different sounds was a key to Prince’s success. This track is jazzy at times, jamming at other times. This was a preview of Prince’s abilities on numerous instruments. The plucking synth and slapping bass on the track let you know this was not only a funky song but here was a bad dude who had the nerve to put a two minute instrumental solo in the middle of their song.

Political song messaging and funk rarely happen in the same song. Few people can pull it off. James Brown‘s “Say It Loud” song comes to mind but it is a very rare occurrence.  But if you’re Prince and you had the success he had in the previous ten years, you do it. Sign “︎[peace symbol]” the Times was released in March of 1987. Most of the time, labels and artists shy away from songs with strong messaging, but Prince’s trademark would be to always lean in to the things which affected him strongly throughout his career, a ‘sign’ of a true artist.

Prince would constantly add innovative, unique percussive sounds to his songs. Sign “︎[peace symbol]” the Times would string a poppy LinnDrum pattern throughout the song along with a thick snare drum beat and strumming guitar.  The Sign “︎[peace symbol]” the Times’ album reached number six on the Billboard 200 and ultimately sold one million copies.

A fully confident Prince emerges on this track to use his music platform to musically sort out his and the U.S.’s inner dilemmas. Themes of mortality, sexuality, drugs, gang violence, AIDS, and other late 1980s human events abound fluidly in this song and take the listener into a time capsule.

The listener is taken into a funky futuristic world of dreamy, seasoned bouncy fun from Prince on “Clouds.” Prince almost seems to give the listener a prediction of the artificial world the musician will occupy.

At one point of the tune, a narrator acting as a guide and nursing aid refers to him directly by his birth name, as “Mr. Nelson.” She seems to allude to Prince arriving at a new destination, which does not require time. He has been made aware that medication he was given placed him in a state of suspended animation for 45 years. The very fact this album release was issued just a few years before his own death, not to mention the circumstances of his death, give this song a very eerie prediction quality about it. The usual immaculate guitars strum throughout as Prince pens lyrically, “In this brand new age we do everything, quick, fast, in a hurry. All of our life’s a stage. Everybody stars, reality is so blurry.”

You can revisit past Vault of Soul articles here, featuring artists such as James Brown,
Aretha Franklin, Marvin Gaye, and more.

Interested in exploring the Soul genre beyond the vault? Be sure to tune into 88.9 every night between 10 pm and 2 am for The Secret Spot. Let host D Danubian wind you up and simmer you down with a blend of R&B, Soul, and Slow Jams.

Also, be sure to check out ERS+, our new HD radio experience. Take a deep dive into R&B and Hip Hop with the legendary voices of Soul alongside new and pioneering MCs. Find ERS+: Boston’s Black Experience online at WERSPlus.Org

The Vault of Soul: Quincy Jones

The Vault of Soul: Ray Charles

The Vault of Soul: Gladys Knight & the Pips 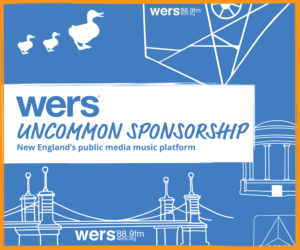